Remember that post the other day about head bobbing in birds and my suggestion about mounting GoPros on pigeons? 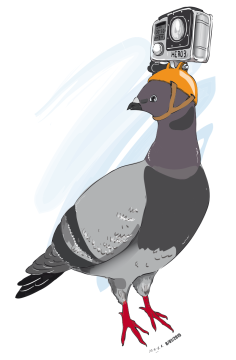 All fine and dandy, I stand by that idea. I do think it would lead to less annoyingly wobbly footage that in then unleashed on the rest of humankind via YouTube.

That only works if you have a head! You laugh? You say, but Mark, come on, most people have a head!

Not so, say I. How about Mikey, the rooster from Fruita, Colorado then? Where would he have mounted his GoPro?

The story goes that on September 10, 1945, farmer Lloyd Olsen of Fruita, Colorado was sent out to the yard by his wife to bring back a chicken for dinner. Olsen chose a five-and-a-half-month-old cockerel named Mikey.

Upon attempting to give Mikey the chop, the axe missed the jugular vein, leaving one ear and most of the brain stem intact. That part of the brain, the Medulla oblongata, regulates many of the vegetative functions of the body such as breathing, heart beat etc.

So despite Olsen’s failed attempt to behead Mikey, he (Mikey, not Olsen) was still able to balance on a perch and walk clumsily. He attempted to preen, peck for food (probably frustrating), and crow, though with limited success (no surprise there); his “crowing” consisted of a gurgling sound made in his throat.

Which is actually rather gross.

Imagine waking up to a Cock-a-doodle-gurgle! Enough to get you out of bed with a jump! That would be a bit like World War Z meeting Big Bird from Sesame Street! Zombie attack!

When Mikey did not die, Mr. Olsen, being a big-hearted fellow, decided to continue to care for the bird. He fed it a mixture of milk and water via an eyedropper, and gave it small grains of corn. 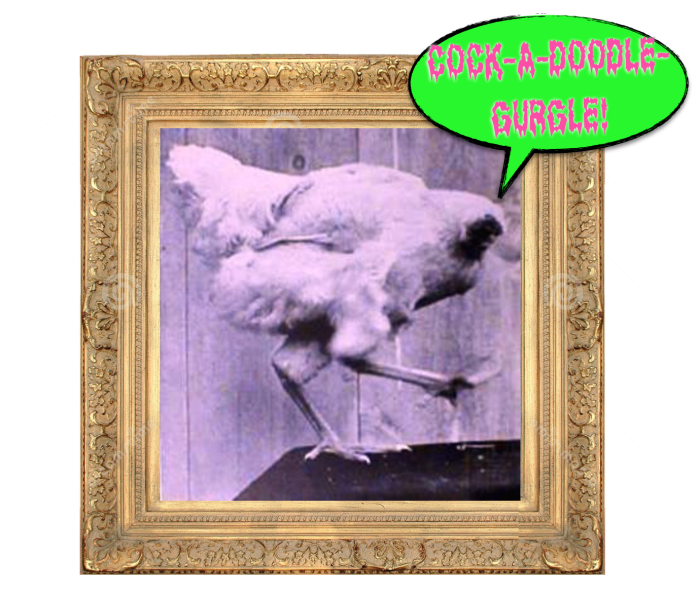 Here is a pic of Mikey strutting. He may be cock-a-doodle-gurgling for all I know, hard to tell without a head.

Anyway, no means to mount a camera on this one’s head – on the plus side however it must be said though that Mikey probably never again suffered a migraine attack .

The world, truly, is a weird place.