… because it’s obstructing my vision.

Had a bit of an overdose of flags recently, what with the FIFA world championship in Brasil and all. Flags seem to be ubiquitous and all the rage, with everybody keen to stake claim to this or that identity – and whatever supposedly goes along with it.

I have to admit that I don’t quite get this strong identification with a country that is ultimately just a set of random lines drawn on a map, there’s nothing organic or natural about that, it is all just in people’s minds.

Having said that, it is – and has been all through history – something people are prepared to go to war over, and are doing so as I write this, just open up the newspaper or go to a news site and look at what is going on in the Ukraine or in Gaza – it ain’t pretty! 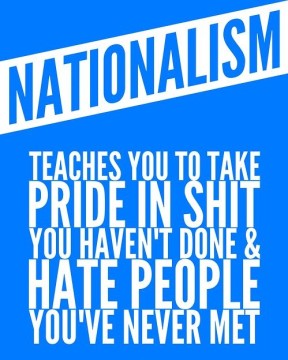 I challenge the fact that people can identify with something as abstract as a country or a nation.

I think in truth what you are identifying with is a perceived set of values or an idealized concept of a nation. On a more human and tangible scale what you can identify with is community. For me, when I am traveling, taking a broad view, I feel a sense of belonging to Western Europe, in the sense that that is where I come from and is the culture I have a deeply ingrained understanding of (well, most of the time, at least). Then, when I zoom in closer, I can identify with the community I live in, which is defined by my friends, my family and my neighborhood.

It’s one of the things I appreciate about trees: they don’t wave flags (well, I suppose they can’t, because they don’t have hands, duh!). Yet there is diversity and variability within the same species, depending on what climatic zone its growing in, but this is influenced by environmental factors rather than lines drawn on maps that date back to post-colonial land grabs, 19th century monarchistic power struggles or post-war treaties.

So, looking forwards to ITCC and ETCC, I say let’s make these events about arborists from all over the world meeting up and celebrating climbers’ culture, our tribal identity within arboriculture, rather than repeating patterns that have caused so much trouble, heartache, displacement and strife all over the world, today and throughout history.

So that, in a nutshell, is why I would prefer not to have flags waved in my face, thank you very much.